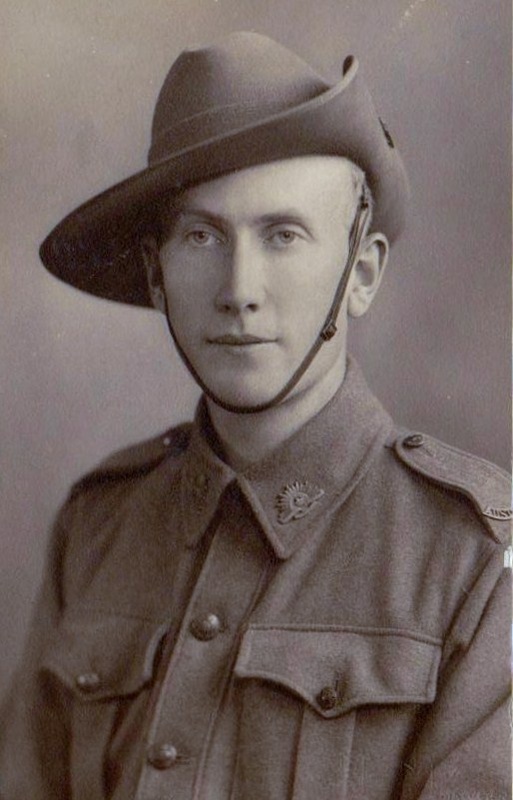 
Wikipedia has this brief history of 26th Brigade (Australia).
The Australian 26th Brigade was an Australian Army Infantry Brigade of World War II. The 26th Brigade was raised in 1940 and formed part of the 9th Division throughout the war. The 26th Brigade saw action in North Africa, New Guinea and Tarakan Island. The 26th Brigade was disbanded in Brisbane in January 1946.
Arthur was among the first soldiers to arrive in Albury when Battalion Headquarters were being established there.
The form  below is an Appendix to an earlier report of 5th September 1940 to correct details of Arthur's position.The amended information reads:
VX 47000. Pte Shannon A.B.  1st Aust Corps Intelligence Wing Attached to HQ 26 Aust Inf  Bde for Cipher Duties.  4/9/40

Click to Enlarge
Below: The first entry in the Brigade's Official War Diary.
As the extract  shows, the 26th Brigade was originally part of the 7th Division. But when the Brigade arrived in Palestine, as Arthur put
it : " after some muddling around,  they established the 9th Division  and we were included in it". 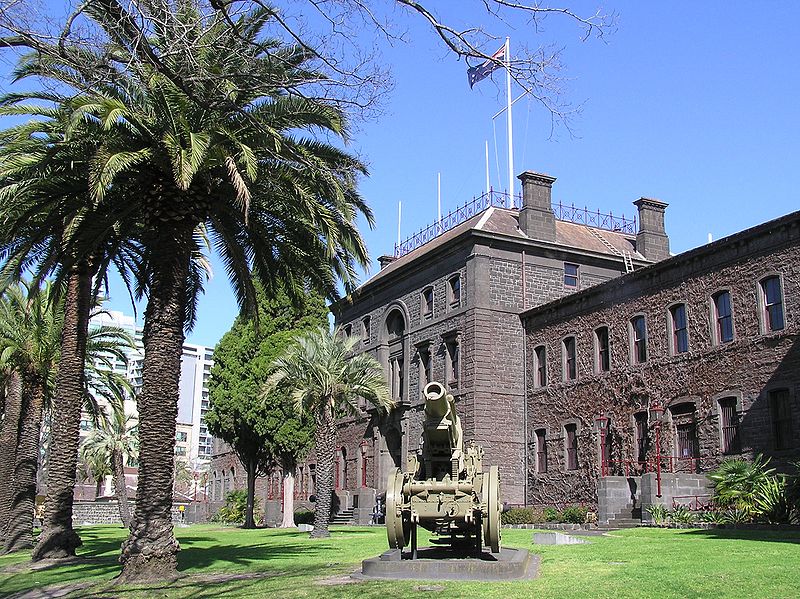 Victoria Barracks, Melbourne
For a short while, the HQ of the new Brigade was in Melbourne at the historic Victoria Barracks on St.Kilda Road.
However, Albury was soon selected as a new location and a
headquarters building was  decided on near the centre of the city. 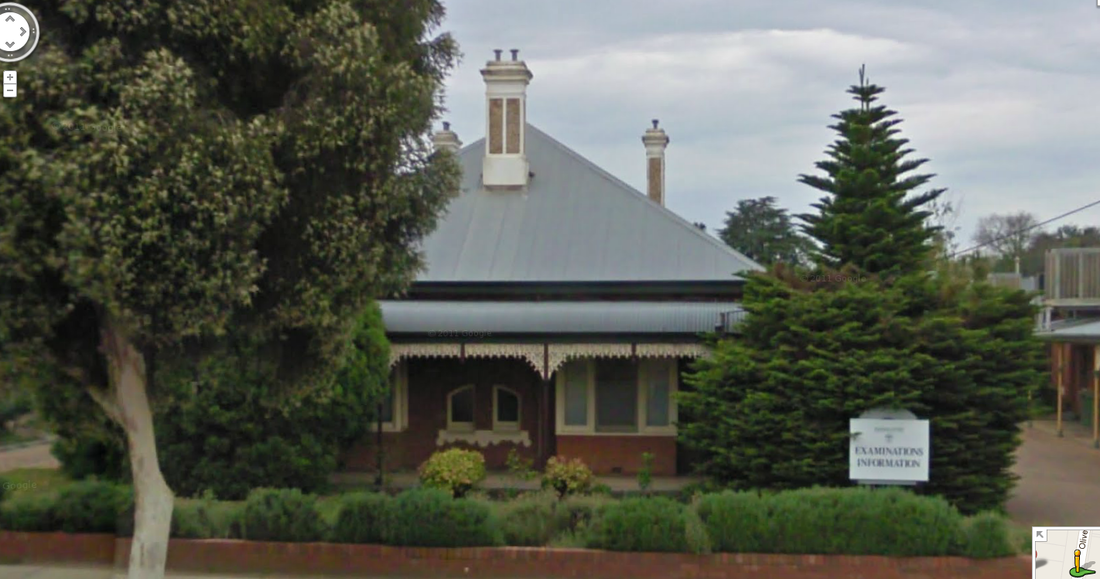 This private house  "Tara" (above) in Olive Street, Albury, NSW, was chosen as the HQ of the  newly-formed 26th Infantry Brigade.
The house is still standing.  Photo from Google Maps.
The local paper reported on the establishment of the HQ, click HERE.

Click to Enlarge
The official war diary extract (above) announces  Arthur Shannon's promotion from Private to Acting/Corporal on 7th November 1940. A few weeks later the promotion was confirmed (below).

Click to Enlarge
Entry from  Brigade's official diary (above)
A parade was held at the Albury Sports Ground on 3 November 1940 where the Battalion Colours and a set of drums were presented  to the 2/23 Bn by the Citizens of Albury. Brig. Tovell inspected the troops and took the salute. 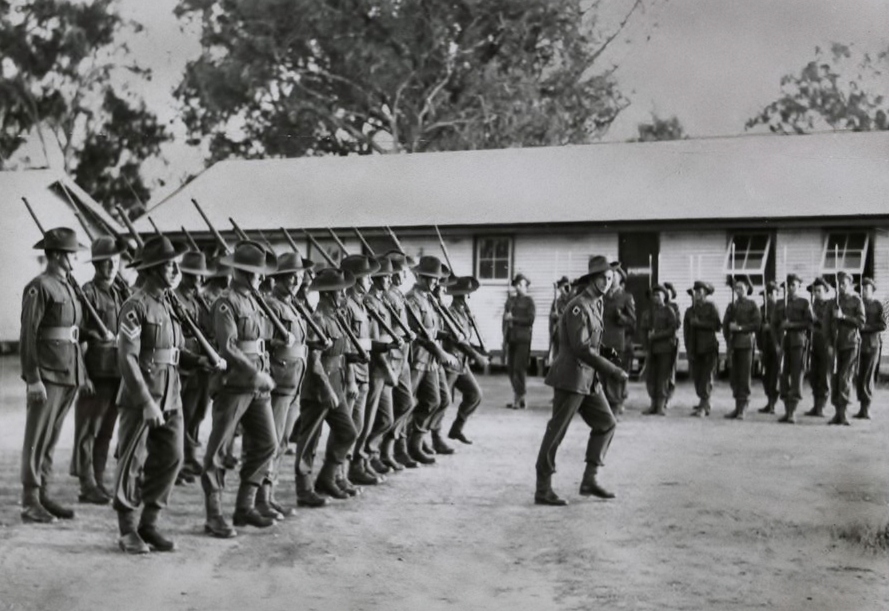 Changing the Guard, 2nd/23 rd Battalion, Bonegilla. Photo (above) from Melbourne Argus.
*  See Note above
Arthur's talents were obviously appreciated by his senior officers. Although his Commission had to wait until 1943 when he returned to Australia from the Middle East, the duty statements in the 26 Brigade official diary reveal that Arthur was often given responsibilities not often allocated to NCOs throughout his years as a Corporal. His attendance at special Cipher Courses and then service at the Allied Military Headquarters in the Middle East support this contention. 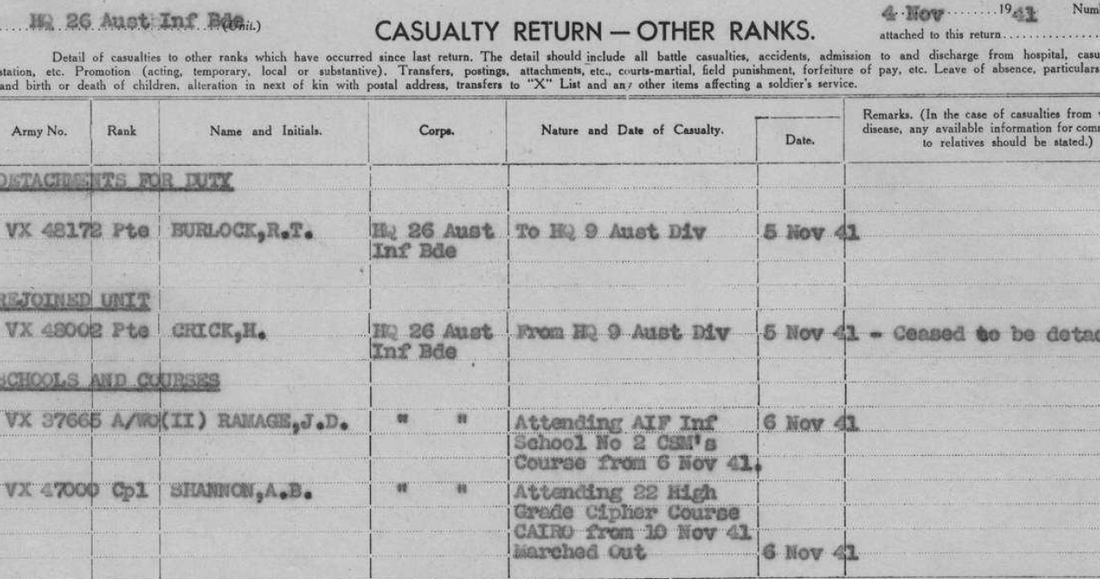 The soldier husband of Arthur's half-sister, Elizabeth, was also based in Albury during some of the time Arthur served there.
Elizabeth ( affectionately known  by her siblings as Tommie ) would drive  her little car up from Melbourne to see him.
Before the horrors of war overtook them, Elizabeth ,her husband Ken Kennedy and Arthur spent some leave time enjoying picnics in the Albury area . 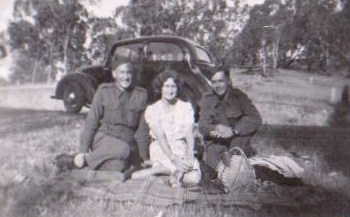 From left : Enjoying a picnic near Albury, Arthur Shannon, Elizabeth and Ken Kennedy. 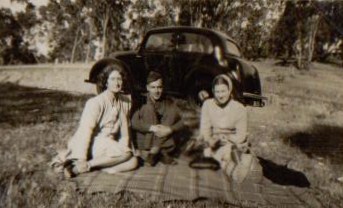 The Kennedys and a friend pose for another snap. Elizabeth's car, seen in the background, appears to be a 1939 Morris 8 Sedan, E Model ( with a snub nose).
On the 1st of July 1942, Ken Kennedy was among an estimated 1000 Australian prisoners of war on the Japanese ship MV Montevideo Maru who perished when the unmarked vessel was hit by four torpedoes fired by an American submarine.
The soldiers, and many Australian civilians, had been captured at Rabaul, New Britain, in early 1942.
They were being shipped to the Island of Hainan, when the vessel sank within 11 minutes of being hit by the torpedoes.
One writer described the Rabaul garrison as a "sacrificial lamb".
The Australians were left without reinforcements and were ordered not to withdraw from their posts.
The small garrison was swamped by a massive Japanese invasion in January 1942.
Click on the photo of the ship, below, to go to the Wikipedia entry on the tragic sinking. This will take you away from this website. You will need to click the "Back" button on the Wikepedia page to return here. 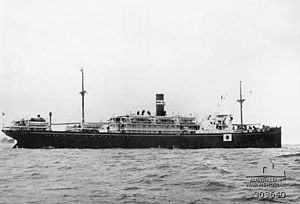