After discharge from the Army and his return  to the Education Department, Arthur was invited to nominate a school where he would undertake a two-week  rehabilitation programme .
He selected Ormond State School,seen above from a Google Maps photo. This  was only about a mile from the family home in Glenhuntley. He would often walk along Booran Road  after school, if he decided not to catch a local bus.
The expected fortnight at Ormond eventually stretched to more than four years!
(Some Trivia: The website author remembers standing at the intersection of  North and Booran Roads, Ormond, with his older brother, chatting with Arthur while waiting for his bus each day. As regular as clockwork we would see a convoy of black cars heading west on North Road. Later, it was revealed that the three cars were the prototype Holden , near the end of their daily test runs in the Dandenong Ranges. The first Holden model was released in 1948.  Like many of the young people who Arthur befriended ,a life-long  interest in cars  developed .) 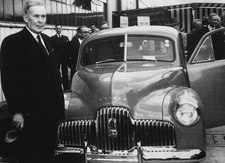 Labor Prime Minister, Ben Chifley, beside the first Holden off the production line, Nov. 1948. The "mystery" of the three black cars travelling down North Road, Ormond, every afternoon was solved.
Arthur resigned from the Education Department to take an eight-month trip to the UK, some European countries, and of course Eire where he met relatives of his father's family. 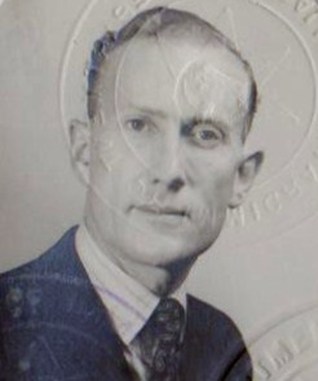 A portrait of Arthur Shannon from 1951. It's  from his passport for his 1952 overseas trip ( hence the embossed impressions of official stamps).
To see some photos of Arthur on his 1952 trip click HERE.
To visit a separate website based on photos Arthur took  during the trip click HERE. 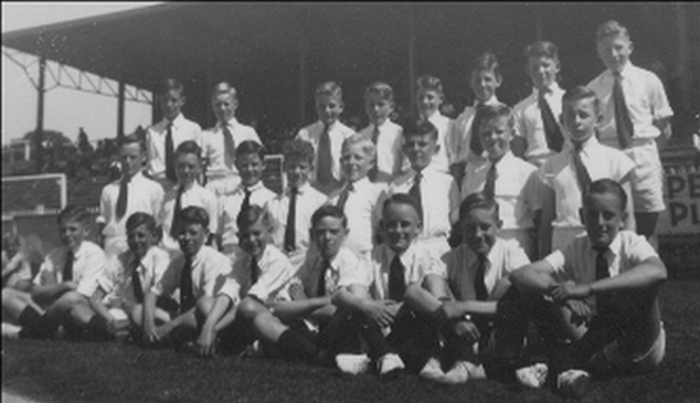 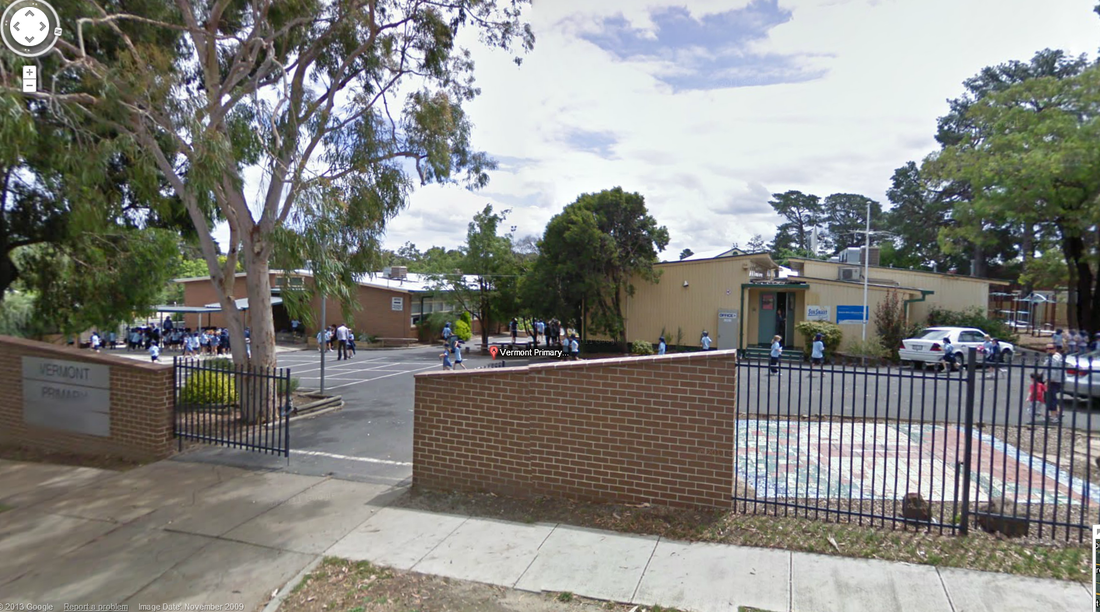 On rejoining the Department  after his overseas trip, Arthur taught at the Vermont State School, in Melbourne's east, for a few months.
Above photo of  present-day Vermont School from Google Maps. 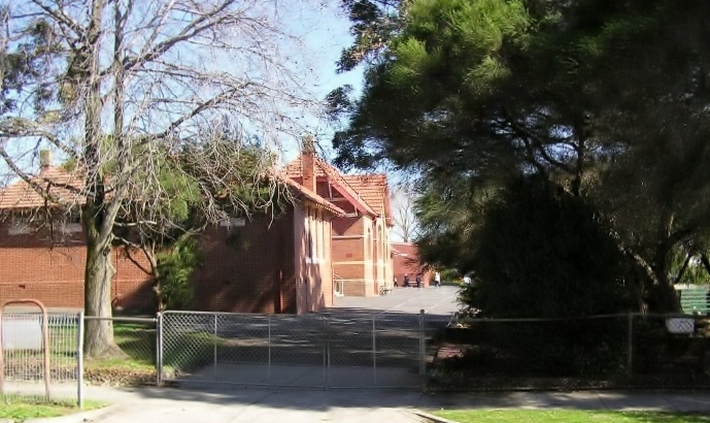 Arthur then went to the  State School  at Moorabbin  , south-east of Melbourne, where he taught  6th Grades for 16 years.
Photos Above and Below. 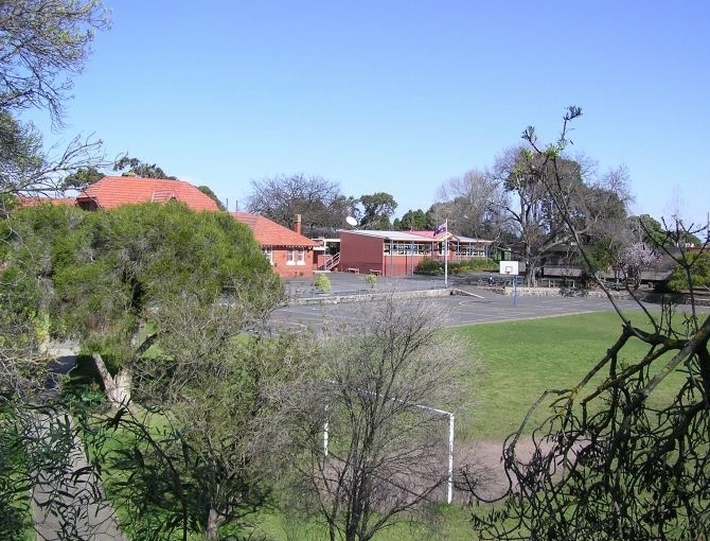 Below, Arthur Shannon's 6th Grade of 1959 at Moorabbin State School. 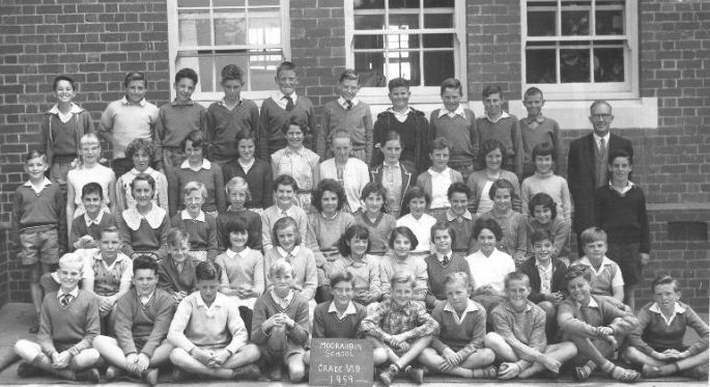 While teaching at Moorabbin,Arthur Shannon instigated moves for the school to honour one of its "old boys", the aviation pioneer Harry Hawker.   Hawker first attended  the Worthing Road State School  at Moorabbin ( above left), and later went on to attend three other schools  around Melbourne before leaving  his formal education behind  at the age of  12.
A  lack of any higher  education did not stop Harry Hawker from becoming a pioneer of early aviation in Australia and England.
He  became  an aircraft pilot and was involved with the design of many successful Sopwith planes.
After WWI he co-founded the Hawker Aircraft company which produced a long string of successful military aircraft.
Photo above right: Harry Hawker at the front of a Sopwith machine. 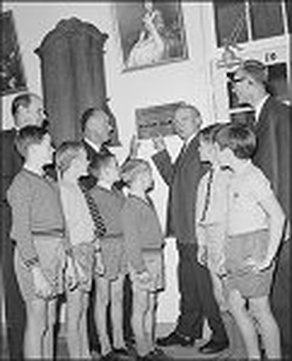 Above: Arthur Shannon's championing of the "local boy who made good" resulted in a plaque in Harry Hawker's honour being set up at his first school.
The photo shows the unveiling ceremony in 1966 with representatives from the local council and Hawker de Havilland, and other special guests. Arthur Shannon at right is with students  Alan Biggs, Graeme Wilson, Robert Wheelar, Guy Coape-Smith, Robert Ellis and David Clottu.   The photo is from The Leader Newspaper archives.
Before officially retiring  in 1973 ,Arthur Shannon moved to teach at Cheltenham East State School.    The present-day school is shown below. Photos from the school's website.

Back to top
To progress to the next main page, What Retirement?, click HERE