While in Jerusalem, Arthur Shannon met a Palestinian officer who was attached to the 26th Australian Infantry Brigade . Lieutenant David Rashid was serving in  "C" Company of the British 16 (Arab Brigade), part of the Palestine Regiment , Middle East Forces.
Working in the same office, the two became friends and David subsequently introduced  Arthur to his brother, Isaac Rashid.
After being discharged from the Palestine Army in 1946, David  worked as an assistant manager for the British airline BOAC, in Jerusalem.

Isaac Rashid was a journalist and sub-editor with a newly-established local magazine, Al Muntada.
Isaac also wrote and produced plays which were broadcast over a Jerusalem radio station and were performed on stage in the city. He was hoping to publish his own magazine after the war.

The brothers welcomed Arthur into their homes to meet their wives,
children , parents and extended family members.

Both David and Isaac were caring and gentle men who looked forward to the end of the war and  a peaceful future .

When Arthur was transferred back to Australia in 1943, the trio continued their friendship through letters. The postal services were unreliable and letters went missing in both directions.
However, the mail that made it through to Arthur was full of  optimism that all would be well in the coming years.

As a journalist, Isaac attended sessions of the Anglo-American Committee of Inquiry into the future of Palestine, which were conducted in the Y.M.C.A. building in Jerusalem.
(Photo below) 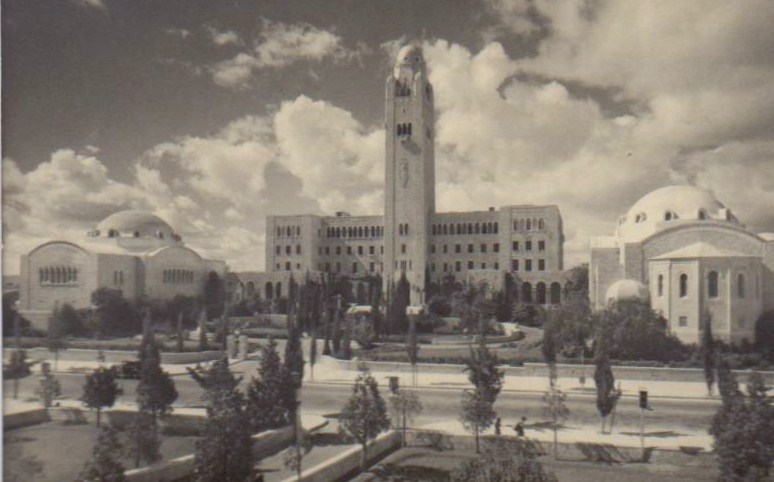 The  Inquiry was a joint British and American attempt in 1946 to agree upon a policy for the admission of Jews to Palestine. The Committee was tasked to consult representative Arabs and Jews on the problems of Palestine, and to make other recommendations 'as may be necessary' to the British and American governments. The Committee's recommendations addressed the matter of immigration and the future government of Palestine.
In a letter to Arthur, dated 18 March 1946, Isaac wrote:
"I  think that you have read that at the moment the Anglo American Committee of Inquiry is listening to the evidence of Jewish and Arab leaders.
Palestine is all quiet now, and  everybody is waiting for the result, hoping that it will be for the good of both parties, and (the)  Palestine question will be settled once and for all.
The Anglo American Committee of Inquiry is holding (their) meetings in the lecture hall of the Y.M.C.A, and I think you know the place.
It really is very interesting indeed to listen and attend these meetings in which you see how the Committee listens to the evidence of the leaders of both parties and how they question them.
This is no doubt a very important page of the Palestinian History.
I have (written) an article about the A.A. Committee  in Palestine and am now writing to a magazine  regular articles."
The long list of recommendations made by the committee to the British and American Governments included the following:


Recommendation No. 3.
In order to dispose, once and for all, of the exclusive claims of Jews and Arabs to Palestine, we regard it as essential that a clear statement of the following principles should be made:

·                 III. That the form of government ultimately to be established, shall, under international guarantees, fully protect and preserve the interests in the Holy Land of Christendom and of the Moslem and Jewish faiths.

Thus Palestine must ultimately become a state which guards the rights and interests of Moslems, Jews and Christians alike; and accords to the inhabitants, as a whole, the fullest measure of self-government, consistent with the three paramount principles set forth above.


As history has shown, this peaceful situation did not eventuate.


In a letter from David Rashid , dated 3rd March 1944, he told Arthur of his approaching marriage:


" I am going to get married soon to a very nice girl, the beautiest (sic) and
best girl in Palestine and maybe the whole world.
I shall send you a photograph of me and the bride later on.
She is in the Services, a Corporal in the ATS ."
For Meaning of ATS Click HERE


Referring to Australia's war against Japanese forces, David Rashid wrote:
" I do very much feel with Australia. I only wish I could be there and fight for it as its sons fought for my country. But still we do our bit wherever we are, to make this war finish quickly."


Correspondence from David and Isaac Rashid stopped abruptly in late 1946.
Arthur continued to address letters to both friends for more than a year. However, he never heard from them again.
Arthur believes David and Isaac and their families probably died in the chaos  and violence which engulfed Palestine in the 1947 war between Arabs and Jews.
Click HERE to return to the page "Seeing the Sights"
Click HERE to go to a page showing photos of Isaac Rashid's Pilgrimage to Mecca.
To return to Hobbies & Interests Page, click HERE
Back to top