Arthur's wide-ranging  interests included geology .  His enjoyment of the science began at Melbourne Boys High School, when he had to choose between studying algebra and geology.   Not being an  "algebra person", the choice was an easy one to make.
Over many years Arthur amassed a fine collection of minerals, crystals,  rocks and fossils.
The author of this website recalls accompanying Arthur to bayside cliffs in the Melbourne suburb of Beaumaris where specimens from one of the most prolific fossil fields in Australia are readily accessible.  On the expeditions, many fossils similar to the one shown below were collected. The  Lovenia woodsi  was a small sea urchin which lived about 40 million years ago.
The fossil is shown at actual size.

Towards the end of his life, he dispersed the collection among  schoolchildren who had shown a keen  interest in geology.

In all its many facets, gardening was one of Arthur's joys throughout his life.
The "bug" got him at the age of 4, when his mother gave him his own garden area and two packets of seeds.
As well as growing flowers and vegetables in his home gardens, Arthur encouraged pupils at several schools where he taught to become involved.
One of the "big hits" with one class was a continuing crop of large sunflowers.
A youngster brought along to school  and planted just six seeds from a giant sunflower.
The next year, there were enough seeds from the first crop for all of the children to plant seeds , which resulted in an impressive show for several years.
Arthur was a long-time member of the Caulfield Gardening Club, and was a volunteer for many years at the Victorian State Schools Plant Nursery.
During his 16 years  teaching at Moorabbin Primary School, Arthur developed a garden with the help of boys from his Grade 6 Classes.


As a result of the participation of students caring for the garden over more than a decade,  many students became interested in gardening  as a hobby . Their efforts also attracted praise from parents and visitors to the school. 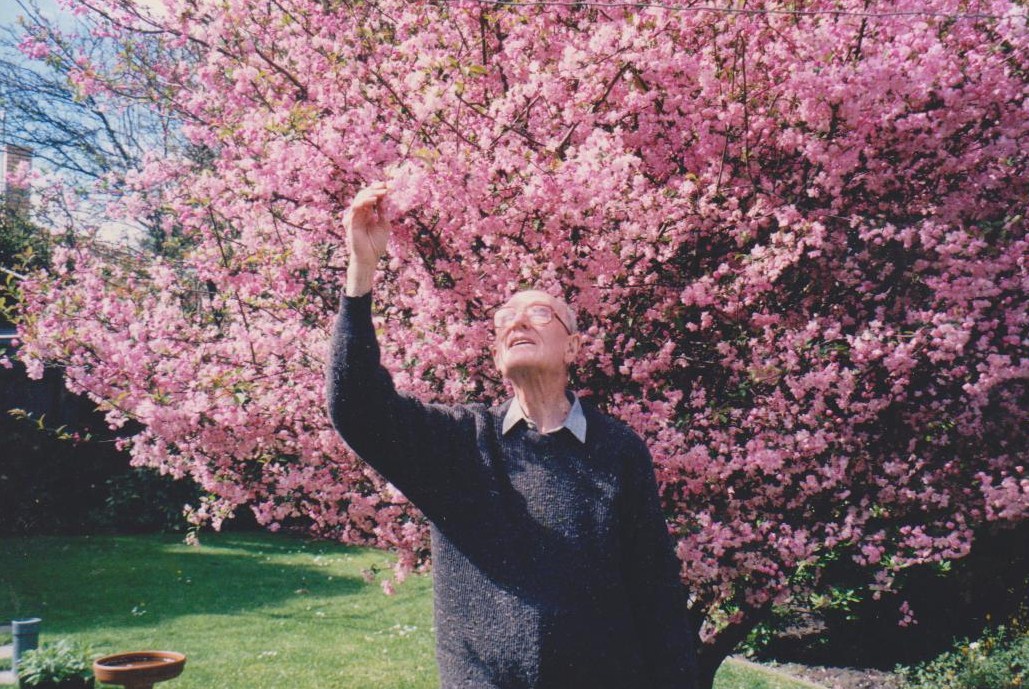 Arthur spent many happy hours in his home garden. In the bottom left of the picture is the rain gauge  he used to collect and collate the rainfall figures for more than 35 years.  Arthur shared the beauty of his garden with neighbouring children, their parents and friends. For more scenes from the garden, click  HERE.

In the early 1970s, Arthur purchased a small  block in a rural subdivision of former farmland at Dereel, about 30 kilometres south of Ballarat.
He spent the next several years transforming the  empty block into a garden filled  with Australian natives  and exotic shrubs and trees .
In his meticulous  way, he gained pleasure from not only planting and watching things grow, but he also kept detailed records. What was planted and when....where it came from...how much it cost..who gave it as a gift...how it fared in drought, wind and frost...which plants succumbed to rabbits...where collected seeds had come from on his travels.....where and when he bought plant tubs, garden stakes , cement slabs and all the other items necessary for creating and maintaining a garden.
Arthur sold his Dereel block in 1986.
Plants similar to those shown below were among Arthur's plantings on his hobby block. Click each picture to enlarge
The Artist
Arthur was proficient at sketching, as attested by examples  from his days as a Junior Teacher  at Noble Park School, Victoria.
His young pupils collected native orchids from surrounding bushland, andArthur identified and sketched them.

Back to top
To progress to the Volcanoes Page, Click HERE