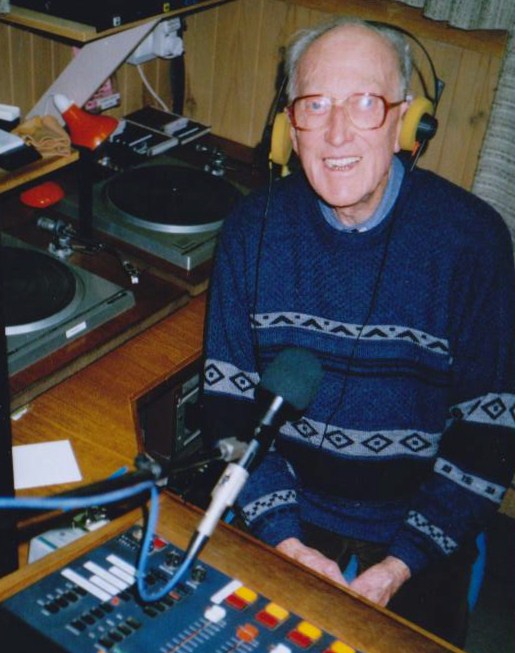 In August 2000, at the age of 85, Arthur was a guest on a programme presented by Pete Beck over a Melbourne community radio station, Eastern FM.
In a wide-ranging interview, Arthur gave details of his life, including his education, teaching experience, hobbies and interests,  and his Army service in World War Two.

In 2006, the year before he died, Arthur still had a sharp mind and was able to recount childhood memories and happenings from throughout his long life.


Church pastor, Damien Ball, visited Arthur at home and had a long chat.
Unbeknown to Arthur, their conversation was recorded on video.
Damien told Arthur at the end of the conversation, that he had captured him for posterity.
When  told,  Arthur said : "Use it wisely".
Some of the information from the video has been used in preparing  this website.
The photo below is from the video. 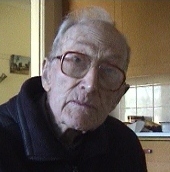 Arthur Shannon kept a complete list of  the various stages in his life, including  his education history, qualifications achieved and the schools and grades at which he taught.
To see this list click HERE.

The  interview below was conducted by Kim Butler a member of the Rats Of Tobruk  Juniors organization. Members are decendents of former "Rats" and continue to honour their deeds.

When you first reached Tobruk was it hard adapting to the terrain?
That was probably the worst part of it. Not so much the land itself, but the weather. It became so hot and the sandstorm were the trouble of course. We didn't have sandstorms every day, but they were frequent and it wasn't just dust, it was sand. The storms would build build up sand around you at night, getting into your hair and eyes.


How would you rate your comforts, food, housing etc?
Food was pretty poor for months, many months. We hadn't any fresh vegetables, fruit, bread and we lived off baked beans and bacon which we had a fair bit of. Consequently I can't look at a tin of baked beans anymore!
The food was pretty poor. Towards the end there were times when it got better. The Australian comfort funds would send  through hampers for us, for instance. While we were in Tobruk it became very hot of course, ans when things were slack we did have the opportunity to go for a swim in the Mediterranean Sea. There were some lovely beaches along the Mediterranean coast and we were able to go swimming and it was very pleasant.


What did you think of the Germans and the Axis forces?
We had a lot of respect for them as far as soldiers, as an army. The Afrika Korps lead by Rommel we respected more than the Italian army.


What did you think about Lord Haw Haw?
Lord Haw Haw was an Englishman, a traitor, and acted as a spokesman for the Germans.
We didn't have any respect for him of course, but the name Rats of Tobruk comes from Lord Haw Haw. He was the one who told us that we were living like rats in holes in the ground. So we were Rats of Tobruk.


Did you feel secure in Tobruk?
I think we did, yes. When we followed the Sixth Division who had been over run in the north part of Libya, driving the Italians out, our job was to relieve the Sixth Divion when they were moved. We had gone beyond Tobruk to near Ben Garzi and we had to return because of  the superior strength of the German army that had come to help the Italians. So we were told by our commanders to go back and hold it. We were not to give up from Tobruk, and I think we felt safe enough there.
Note. Arthur rarely spoke about his war experiences. However one anecdote he shared with this Web Builder suggested he was far from safe in Tobruk. He told of being in a trench during a bombing raid, when the soldier beside him put his head up to see what was happening. A moment later, Arthur turned towards his colleague to discover that he had been decapitated by bomb blast.


How was your relationship with the British and other Allied forces?
Quite good, especially the British artillery. They were very good. In fact if it hadn't been for them we would have been driven out, they were very important to us. Indians we didn't see much of, but the Polish people and they were good too. We were pleased to have contact with the Polish people because of their country having been taken over by the Germans. They were keen on having a  go at them.


How long were you in Tobruk?
Six months and just a few days. It was from the 10th of April until the 19th of October.


Why was your time six months?
At that stage General Blamey felt that we'd done our turn there. Having six months in the desert like that, and he decided that we should be relieved. But Tobruk was still to be held and we were relieved by  a British army brigade. I think it was the 23rd brigade.  They came in by ship of course, there wasn't anything to do by land. They came in by ship and we went out in the same ship.


After you were relieved did you again get involved back in the war?
After Tobruk the people sent me to do a cipher course in Cairo. The cipher course lasted two weeks and then I was posted to British army general headquarters for another two weeks to work there and have the experience.
Then I was returned to my unit in Palestine at that stage and we were moved up to Lebanon to relieve our Seventh Division who were operating there.
From there , this is where I lost contact with friends and mates, because I had done this cipher course they wanted me to be using my new knowledge more efficiently than a brigade headquarters. So I was moved from 26th Brigade Headquarters to AIF Middle East Base Area in Gaza. I wasn't very happy about that because I left all my friends. Of course I made new ones, but it was a break that I didn't want to have. After that, 26th Brigade were involved in (the battle of ) El Alamein. But I had gone, so it was nothing to do with me except that in doing the cipher work in Base Area we got all sorts of messages right through Alamein, very unhappy ones. A lot of unhappy ones with people I knew who had been killed for instance.

Did you decode any enemy messages?
We were only involved with our own messages. Our messages were put into Cypher. But if they were sent by (land) line it didn't matter because the enemy hadn't any contact with the line. Then our job was to decipher the radio messages and for messages to be put into Cipher, to be sent. We were placed with Signals, which was fairly natural, the signal people sending the message and we were doing the ciphering and deciphering. That was officially my job for the rest of the war.


Were there many people working in that area?
Not a whole lot, no. In brigade headquarters I think I was the only one. Then in the base area there were about five or six of us and we worked in terms. We had to be on duty the whole 24 hours, which meant we had to be on shifts. Probably were were reduced to about two or three people at a shift and then we were relieved and another lot took over for their turn.


Were you well informed of what was happening in the Middle East?
We knew pretty well. There was not much top secret stuff that was hidden from us. We were involved in top secret messages, deciphering them and handing them to Brigadier Tovell for instance.


Were you involved in any action that took place?
No, not really. We were not in the front line, we were back a bit. But sometimes there were shells not far away and occasionally some bombs. But no hand to hand fighting or anything like that.


Were you prepared for any close fighting?
More than once it looked as though we were going to have to, when the Germans for instance broke through on the southwest corner of Tobruk perimeter. It looked as though they might have gotten as far as brigade headquarters, and we would have to do something then. But it didn't happen. We were prepared if it did happen.


Do you have a good memorable moment?
Yes, the whole thing has been important to me. I find at this distance that it's the good good things I remember, not the bad things. They have sort of gone. It's the good things that come into my mind.


What do you think was the best part of your war experience?
The opportunity to see so much of the interesting parts of the Middle East would be tops for me.  Because as well as those four weeks in Cairo, which enabled me to have a good look around Cairo, I had another week's leave there and I had plenty of leave in Palestine to get around to all sorts of places. For instance, I was in Jerusalem ten times!  Also I was able to see a bit while we were in Syria, Lebanon and was able to get over to Transjordan, which is now called just Jordan. And that's what I look back on with pleasure. 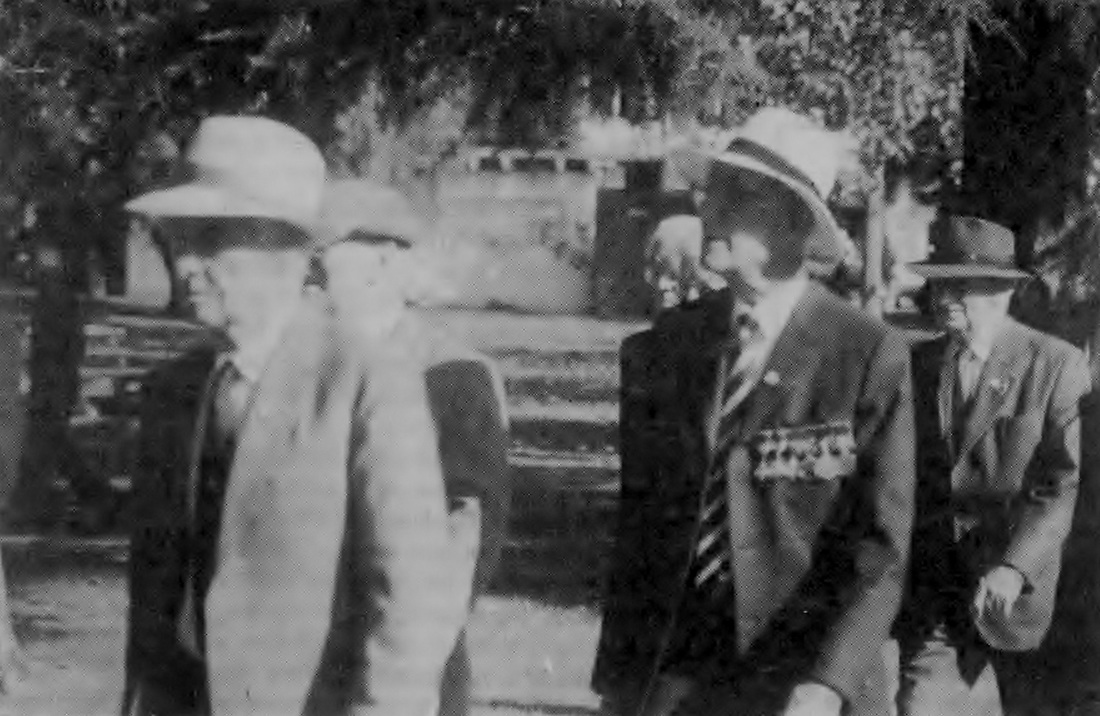 VX47000 (White hat and Medals) Marching in a local parade in Caulfield 18 April 1990 as part of an Anzac Day Civic service.   Above Photo : Caulfield Contact. 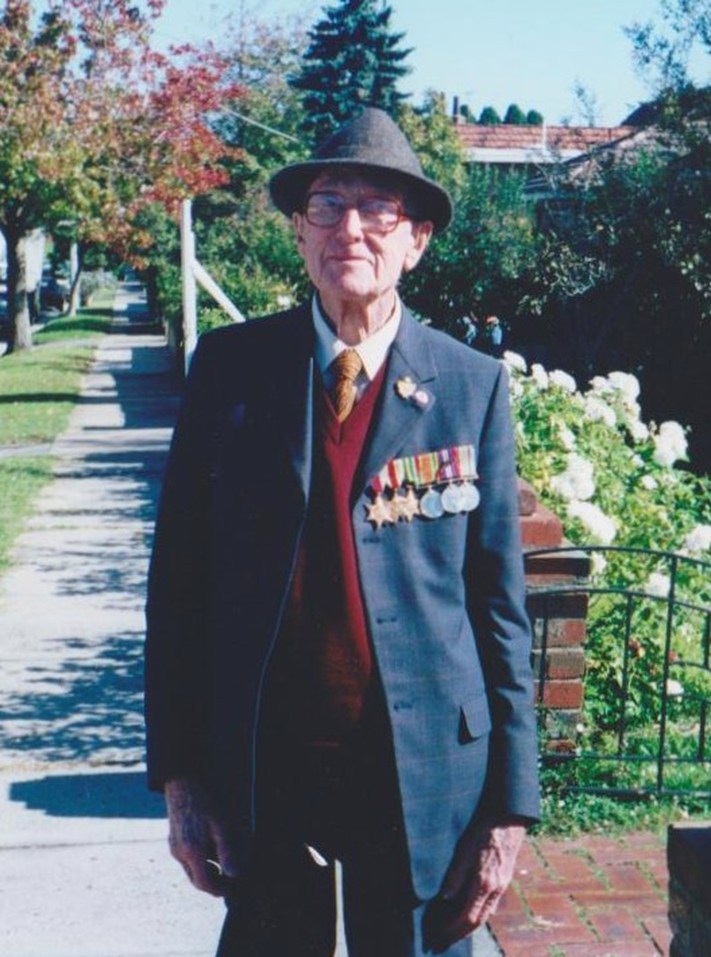 Arthur Shannon (above) outside his house in Albion Street, Caulfield South,ready for an Anzac Day Service in 2006. 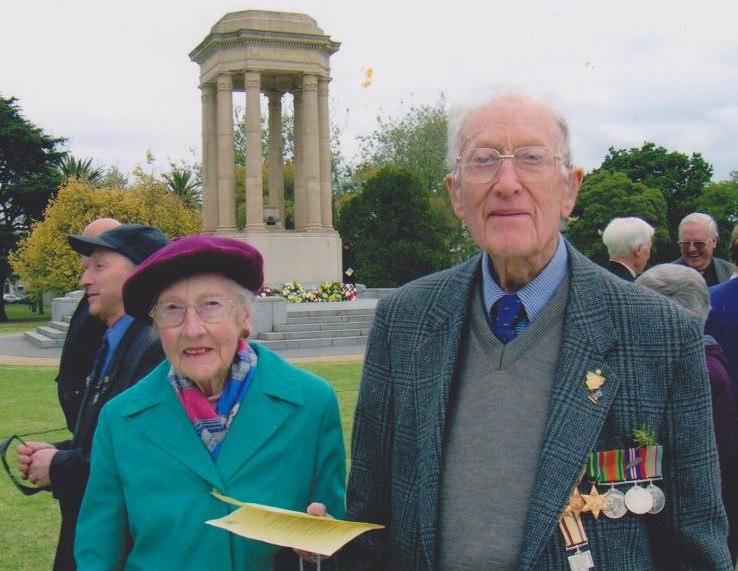 Above: Arthur with his sister Elsie at an Anzac Day ceremony in  Caulfield Park ,Melbourne,  2000.
Arthur Shannon was honoured with Mention in Despatches in recognition of his work at Brigade HQ during the Seige of Tobruk. The honour is diplayed as an oak leaf device which is placed at an angle of 60 degrees on the ribbon of the 1939-1945 War Medal. The above close up shots of Arthur's medals being worn on Anzac Day 2000 clearly show the device. 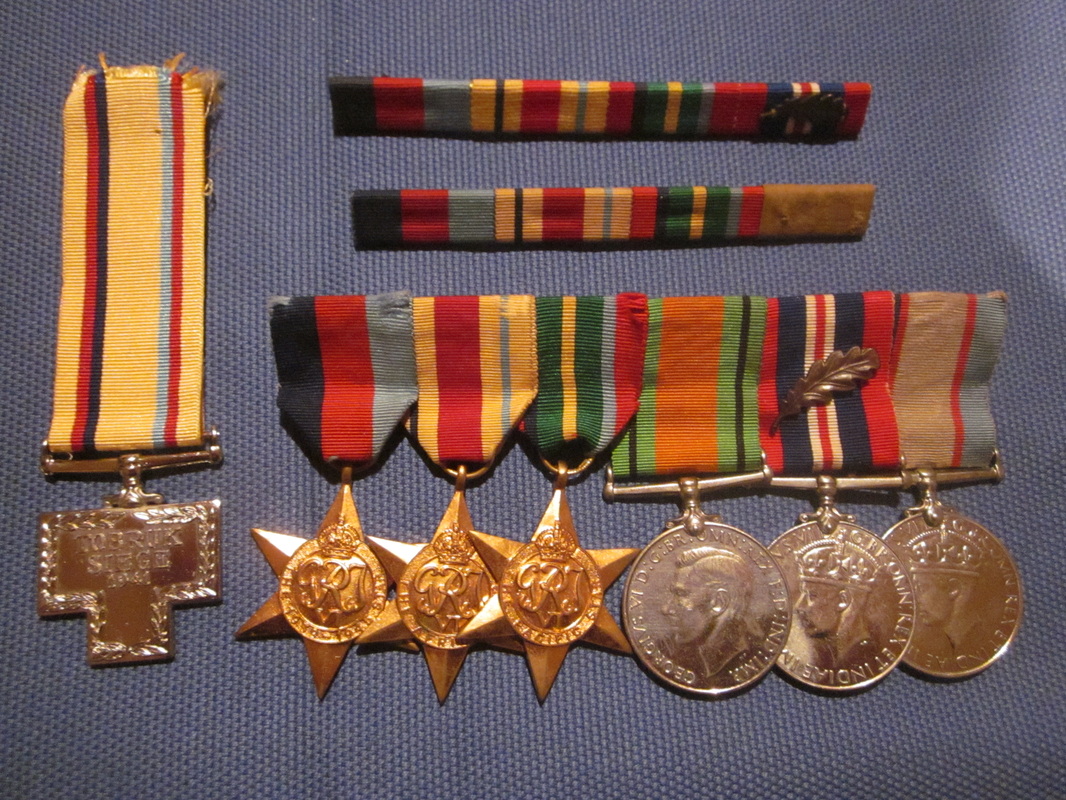 On display: Arthur Beaumont Shannon's War Ribbons and Medals. The Siege of Tobruk Medal is at left. The Oak Leaf Device, signifying Mentioned In Depatches, is seen second from right on the ribbon of the 1939-45 Medal.
A letter to Arthur after the war, explaining his medal entitlements. Click pictures above to enlarge them.
Arthur was awarded a Centenary Medal in 2003. Click the pictures below to enlarge them.

More of Arthur Shannon's war items are shown below. Click each picture to enlarge it.
Back to top
To go to the page which explains the Australian Honours System Click HERE.
To progress to the next main page Faith, click HERE