With the fall of France and the establishment of the pro-German Vichy government collaborating with the Germans in the south of the country, the Allies moved in June, 1941 to pre-empt a possible German occupation of Syria.

In January 1942 the 2nd/26th Brigade moved from Palestine into Lebanon and Syria to relieve the 25th Infantry Brigade.

The below extracts from the 2nd/26 Brigade official war diary give an idea of the planning required to move troops to new locations. 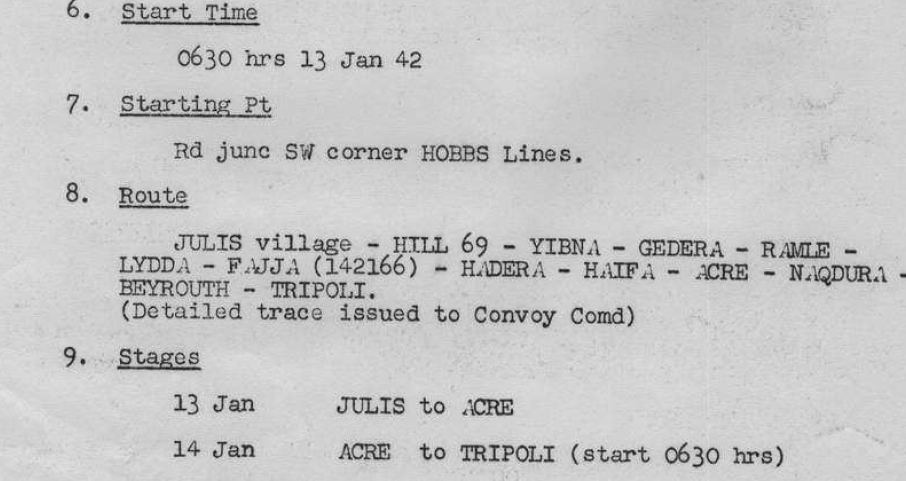 Transporting the troops by road involved a convoy of 154  three-ton trucks.
Arthur Shannon was  on the fourth vehicle in the first convoy of about 70 trucks.
The 9th Division honed their battle skills with an extensive training programme during their time in Syria.

They then moved to Egypt and joined the British Eighth Army which launched an offensive in the Second Battle of El Alamein.

The breakthrough on the 4th of November 1942 by General Montgomery’s forces  eventually enabled an Allied advance through Libya to Tunisia and the driving out of  Axis forces from North Africa.

After the second Battle of  El Alamein, the 9th Division returned to Palestine, and soon after was returned to Australia.


Arthur Shannon did not accompany the Division to Egypt. He was transferred to Head Quarters A.I.F. (Middle East) in Palestine.
He then spent six months working at Kilo 89 Camp on Gaza Ridge in Palestine. The camp's name reflected the fact that it was 89 kilometres from Tel Aviv.
The Cypher and Intelligence work was particularly busy during the first few months. This was due to a need to prepare contingency plans for a possible diversionary attack on Palestine by the Germans.
To return to main Palestine page, click HERE
To go to the  page dealing with the Brigade's return to Australia, click HERE
Back to Top