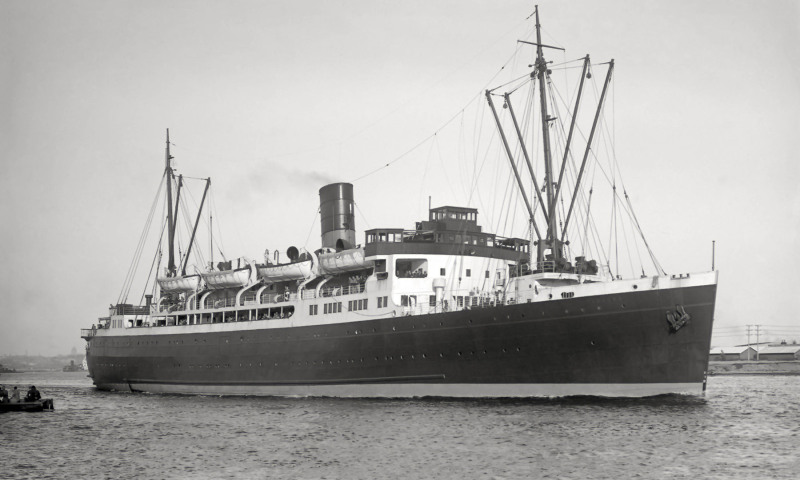 Taroona photo by the Late Allan Green, Victoria, Australia.
Taroona began service across Bass Strait between Melbourne and Devonport  in 1935.

At 4,286 tons she had accommodation for 450 passengers,
about 30 motor vehicles,and carried refrigerated and other cargo.


She was requisitioned  in late 1941 for service as a troopship in World War II.
She carried troops from Auckland , New Zealand to Suva, Fiji  in January 1942.


In March 1942, she was taken over by the Australian Navy for service in the North of Australia and New Guinea.

The RAN’s first trip was to Port Moresby with 480 military personnel and 190 tons of cargo.
Taroona was a “lucky ship”. At the start of the return trip she was stuck hard aground on a reef leaving Port Morseby Harbour.

On two occasions before she could be towed off the reef, Japanese bombers on their way to attack Port Morseby airport ignored the stricken ship.

Taroona went on to carry about 93,500 troops  and sailed almost 205-thousand miles on 94 trips providing  a shuttle service between Townsville and various locations to Australia’s North.  Those 94 trips included transferring  Lt. Shannon from Port Morseby to Lae , and when the war ended,  returning Arthur  from Bougainville to  Brisbane ,Australia in  September 1945.
Taroona  resumed normal services across Bass Strait in October of that year..


Above information based on webpage "Some History of  Bass Strait Shipping",
authored by reidgck@nex.net.au


Some trivia.  In the late 1940s Arthur Shannon took the author of this website and his brother to see the Taroona berthed in the Yarra River, in Melbourne. He commented that the small ship "rolled about a lot", but made no mention that  he had sailed on the Taroona  during the war or that it   had brought him back to Australia after the war ended.
Back to Top
Click HERE to return to Hospitalization page