Parts of Tobruk burning after an enemy bombing raid a few weeks before the 26th Brigade arrived in Libya
Arthur Shannon moved with the 26th Brigade from Palestine to the Western Desert theatre of war in February 1941, as  action took place against Axis forces in Libya.

The troops moved in Truck Convoys from Palestine, across Egypt and into Libya.
There they confronted and attempted to halt an advance towards Egypt by the enemy.
As the 26th Brigade moved west towards the advancing  enemy forces, Arthur Shannon was appointed to the Brigade's PAD Organisation, with responsibility for detecting incoming enemy aircraft.


Arthur's interest in motor cars, was matched by a similar enthusiasm for aircraft of all types. As a result, his senior officers turned to him whenever aircraft appeared on the horizon and needed to be identified.
Arthur also put his sketching abilities to use by drawing silhouettes  of planes to assist others in identifying approaching aircraft.
See diary extract below. 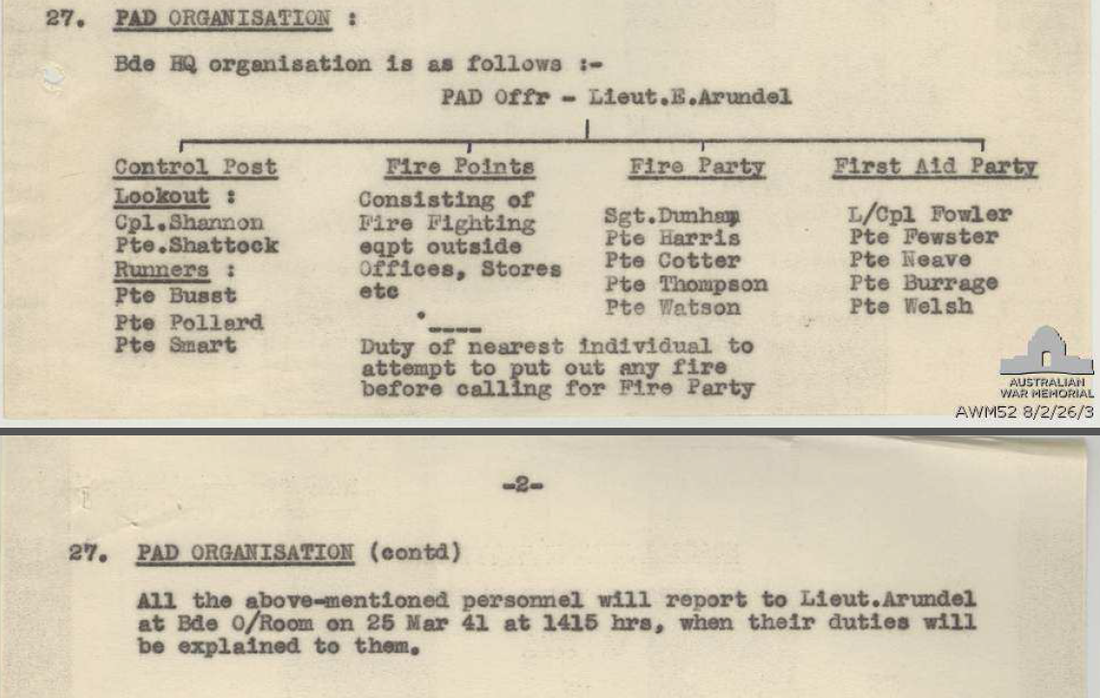 Click to Enlarge
The following extracts from the official war diary of the 26th Infantry Brigade tell how the Aussies had to fall back to Tobruk.
Again the Brigade diary appears to be in Arthur Shannon's handwriting.
A copy of the original  diary is shown below.

The historic entry on the night of 8th April 1941 records the beginning of what was to become The Siege of Tobruk.

The Siege of Tobruk officially began on 11 April 1941 and ended on 27 November 1941.
Withdrawal of 9th Division forces began in September 1941 as General Blamey deemed they had done their bit, and should be relieved.
The 26th  Brigade  moved back to Palestine in early October 1941. 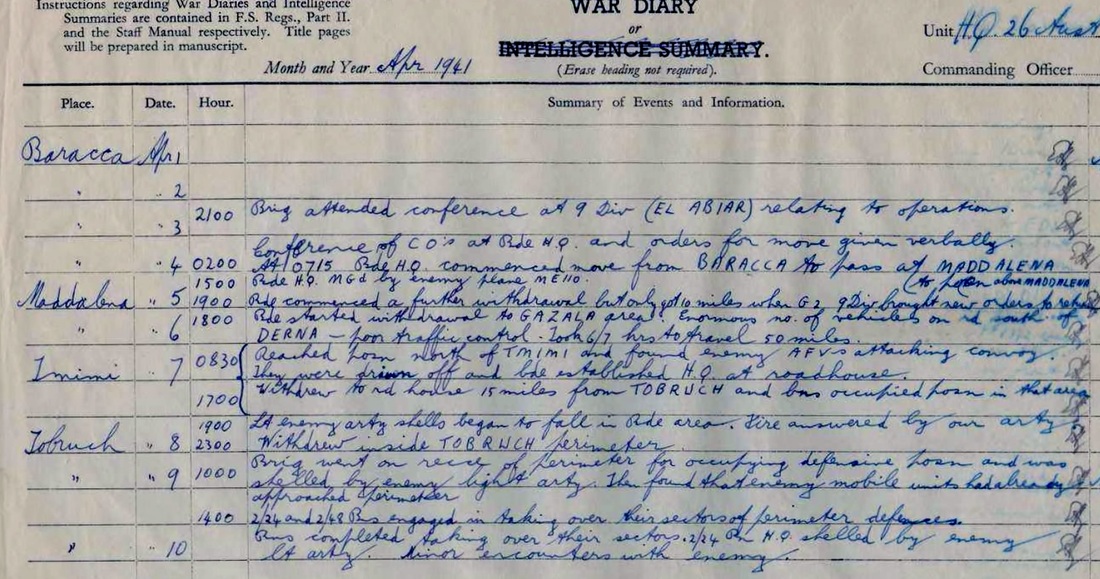 Click to Enlarge. Zoom in to enlarge further
A breakthrough of the defences on 13th of April 1941 occurred in an area being defended by the 17th Brigade.
Germans using mortars and machine guns were repelled by a small group of troops of the  Brigade. In hand to hand fighting ,they used bayonets and hand grenades to beat the intruders back.
One of the group, Corporal John Edmondson died of wounds shortly after. His bravery was recognized with a  Victoria Cross awarded posthumously.
He was the first Australian to receive the Victoria Cross in World War 2.   He is  is buried in the Tobruk war cemetery..
Cpl. Edmondson's VC was presented to his mother by the Governor-General on 27 September 1941.
In 1969, she presented her son's medals and some of his personal belongings to the Australian War Memorial, where they  are on display. 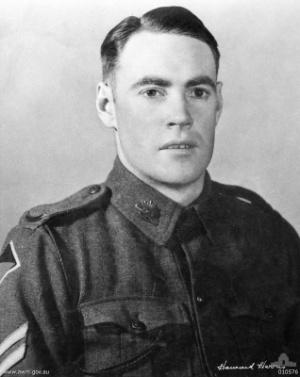 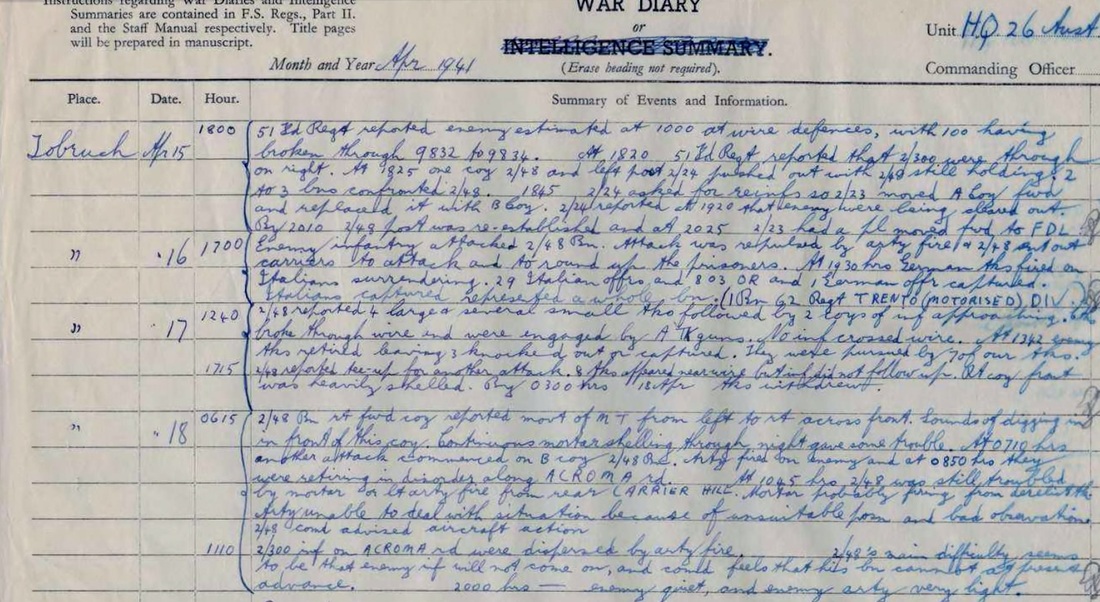 Click to Enlarge. Zoom in to make even bigger
The diary above, covering the events at Tobruk from April 15th to 18th reveal a nail-biting scenario of attacks on the defenders of Tobruk by  as many as 1000 enemy soldiers at one part of the wire defences.
They break through the defences in several places, in numbers between 100 and 300 troops,  but are repulsed by  a swift, efficient  and brave response by the defenders.
At 1930 hrs on the evening of April 16th German tanks began firing on Italian troops as they tried to surrender.
Later that night a total of 29 Italian Officers, 1 German Officer and  803 Other Ranks had been captured.

Click to Enlarge.
The diary section above covers from 22nd until the end of April. It shows the Australians made two successful raids on the enemy outside the siege boundaries. They also repulsed three enemy raids on April 24th, with one enemy attack involving 500 infantry and the other two raids 100 men each.
The first unsuccessful raid resulted in the capture of 2 Officers and 106 Other Ranks, and the second attack resulted in the capture of 1 Officer and 6 Other Ranks.
A relative calm descended on Tobruk for the following six days of April. 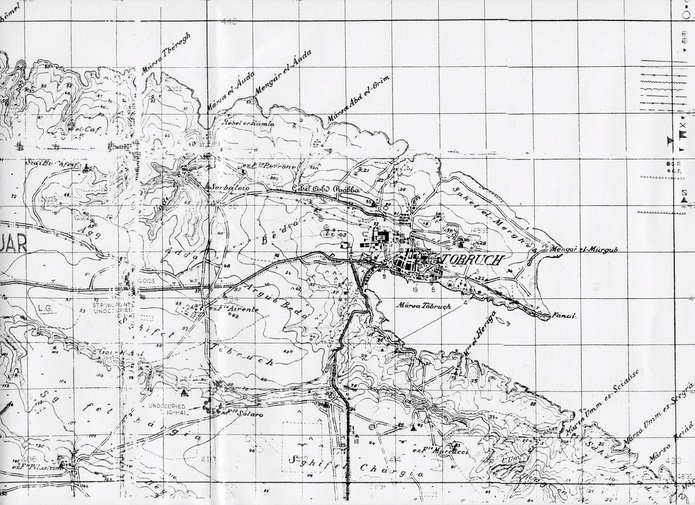 Click to Enlarge
Above: One of the maps the 26th Brigade used while defending Tobruk. 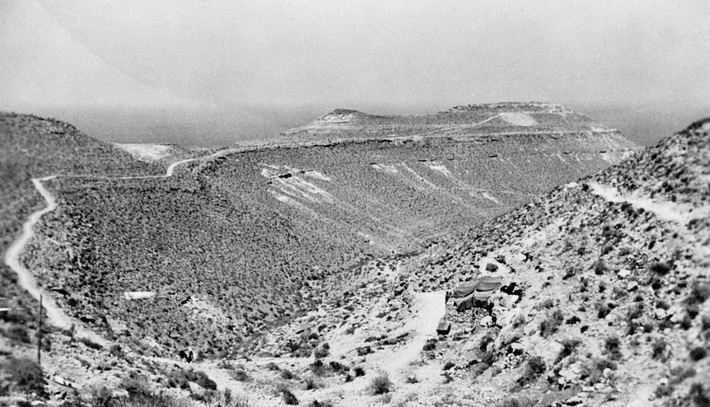 Wadi  Marza ez Zeitun, the eastern perimeter of the Tobruk defences. This photo was taken by Arthur Shannon on 31st May 1941 during the siege. Note the Army site in the right foreground of picture.
As part of the 26th Infantry Brigade HQ, Arthur served on the Eastern Sector of Tobruk's defences from 20 May to 18 August, 1941. 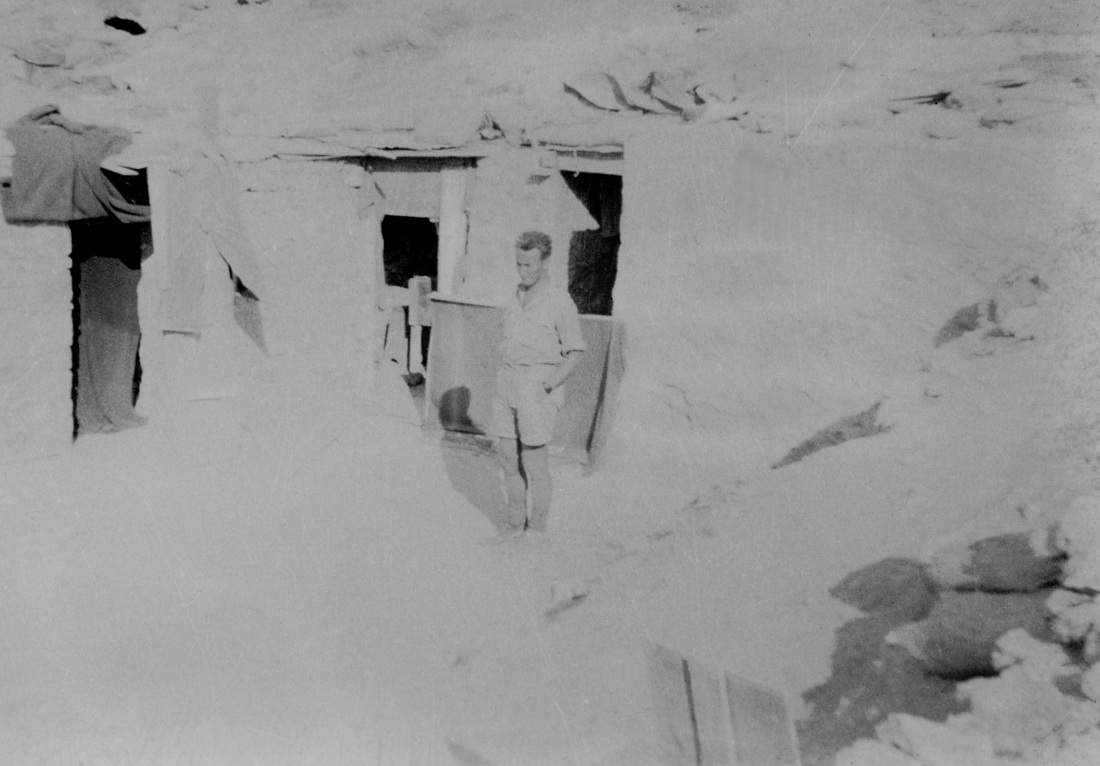 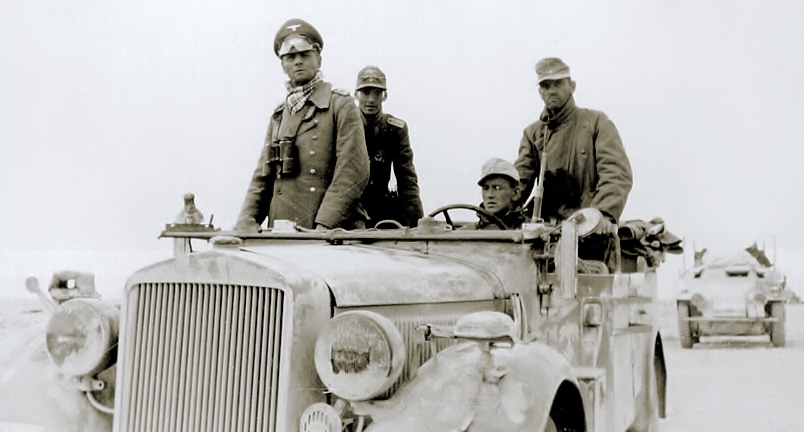 Arthur Shannon told an interviewer that the Australians had a lot of respect for the Afrika Korps as soldiers, and as an army led by Erwin Rommel (above photo). Rommel reciprocated his respect for the Aussies. He described the 9th Division at Tobruk  as :" immensely big and powerful men, who without question represented an elite formation of the British Empire, a fact that was also evident in battle". 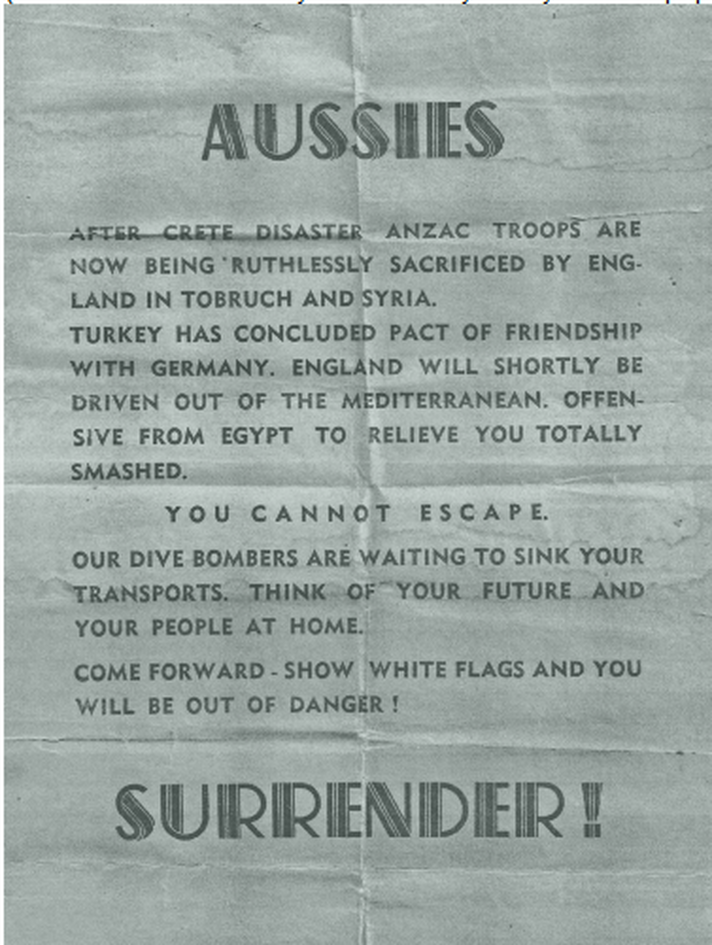 As well as bombs, German warplanes dropped these leaflets   in a vain attempt to encourage the "Rats" to surrender. The Aussies reported they made excellent toilet paper!
The   above  leaflet was sent by Thomas Ingham VX30904  (Killed in Action) to his niece Mrs Beverley Wier.
Arthur Shannon recorded in his personal diary that a Henschel flew over Tobruk on the afternoon of 24th June  1941, and dropped some of the leaflets.

A Henschel Hs-129 B, similar to one which dropped "surrender" leaflets to the besieged Rats of Tobruk.
Arthur Shannon was honoured  with Mention In Despatches in recognition of his service during his time at Tobruk. 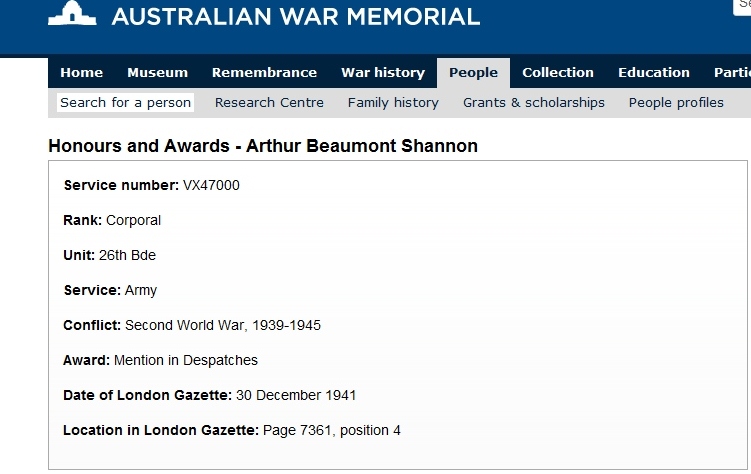 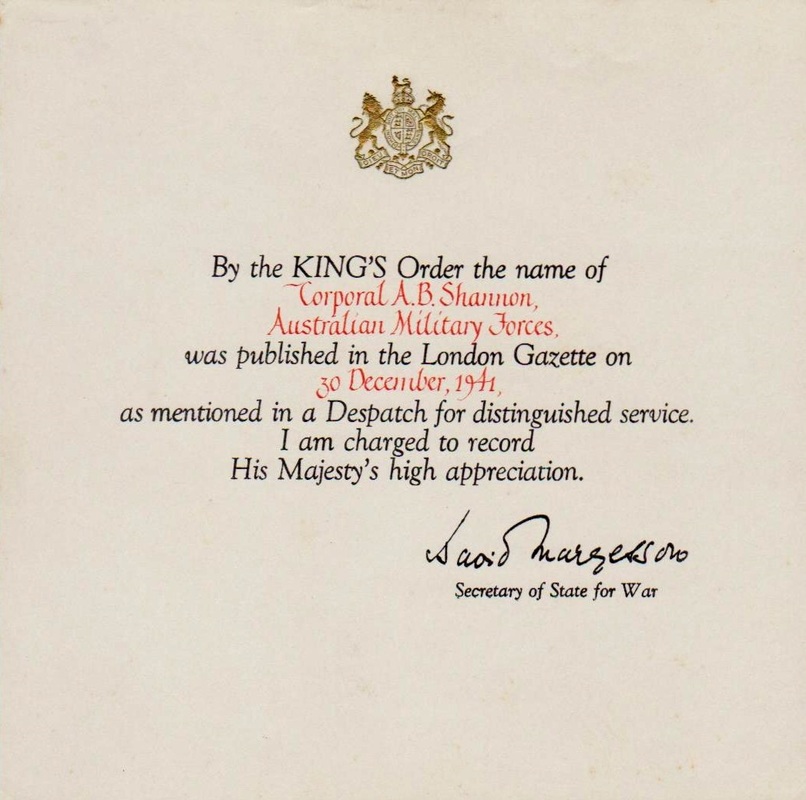 For an explanation of the award and other Australian Honours click  HERE.
To understand why the defence of Tobruk was so important to the Allies in the  Middle East Campaign,  click  HERE.
Another  extract from the 2nd/26th Brigade official war diary , which appears to be in Arthur Shannon's handwriting,  deals with the withdrawal of the Brigade after more than six months  defending  Tobruk.
Click HERE to see it.
Planning for the Australian forces to leave the besieged city, and hand over to  relieving Allied forces, can be seen in an extract from the official war diary.
Details of the operation  codenamed "Cultivate" can be seen HERE
Click HERE to go to  page  Praise for The Rats
Back to top